This Brosnan Risk Consultants (BRC) Strategic Intelligence Briefing covers the period from October 25th to November 2nd, 2021 and discusses issues related to recent economic, political, socio-cultural, and/or environmental events that may have an effect on property, travel, commercial, logistical, medical, and retail security throughout the United States or other global markets.

At Brosnan, we believe that actionable intelligence is a cornerstone of providing the best security guard service in the nation. The Strategic Intelligence Briefing is developed by the Brosnan Intelligence Group (BIG) and is an example of the high-level Intelligence as a Service (IaaS) that Brosnan offers as part of our overall security packages. In our determination to excel as the best security guard company we set ourselves apart from other security services companies by providing our clients throughout the United States with products that are intended to arm them with actionable data that they need to make informed security-related and operational decisions throughout all levels their organizations.

How Linked are China and Russia in Facing Off Against the U.S.? 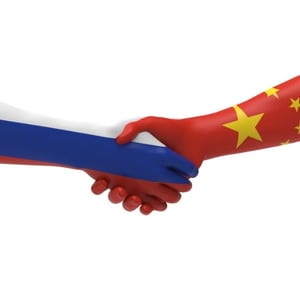 According to US experts on Russia and China, it is impossible to separate the two nations when it comes to how they are confronting the U.S. While the former is a rising power, and the latter is a revisionist power, they share two important factors: they both hate the U.S. and they both view the current situation as being rife with opportunity as the U.S. is perceived as weak.

China and Russia have had a complex relationship over the years. While cooperative and confrontational at different times, they have also learned from one another. In the case of China, they learned from the Russians regarding their ability to affect influence via information warfare. This was most graphically displayed during the 2016 presidential elections when the Russians were able to influence the direction of the results at a low cost.

Regardless, both China and Russia are focused on cyber to guide them into the future. For its part, Russia speaks openly about dominating the information space while China has expressed its aspirations to be the new focal point for the future of the internet. For China, this is a whole of nation effort, with the Communist party and the military/intelligence apparatus working hand in glove, employing any means possible to achieve their goals.

In addition to having the desire, they both also have the capability and capacity to mount campaigns that are synchronized and can have immediate effects- and this is not hidden. For both nations, what they say in public mirrors what they are saying and doing clandestinely to affect the direction of the discord in the U.S.; focusing on racial tensions in the U.S., pointing to the U.S. being in decline, and doing this in a mocking manner. In other cases, regarding the Chinese in particular, they have focused on mischaracterizing the conflicts that have taken place between police in the U.S. and racial groups to exacerbate tensions.

They are also working in parallel to exploit COVID and U.S. attempts to aid the international effort. With regard to the Chinese, they have deflected responsibility for the pandemic, saying that it was actually manufactured in the U.S. As for Russia, their efforts have supported this with additional claims undermining the efficacy of the U.S. developed vaccines.

In responding to their own internal dissent, Russia and China have instituted stringent foreign agent laws meant to undercut any person or group seen as a threat. For the Russians, these laws have empowered them to detain Alexei Navalny, while the Chinese have been able to cripple oppositionists in Hong Kong.

All of this said, the traditional tools at the disposal of the U.S. are not working. Sanctions and expelling diplomats are not having any effect. In fact, in some ways, such steps empower the Russians and Chinese to take their own action against innocents, which happened when the Chinese arrested two unsuspecting Canadians (Michael Kovring and Michael Spavor) as a result of Huawei’s CFP Mend Wanzhou being detained in December 2018. They are also looking to one another in a supportive capacity. We are now seeing China and Russia undertaking joint military exercises, something we haven’t seen since the Cold War.

The U.S. response has been mixed. While there have been some efforts to engage and counter Russian and Chinese aggression, for the most part the U.S. and President Biden have undertaken an unambitious program, having a low appetite to confront them and deal with the resulting problems.

When looking at the two nations, while they are both clearly focused on the U.S., it is also clear that China holds all the cards. Russia’s way of looking at the world is a zero-sum game approach. Cooperation with China is for a reason, and not a sustainable path forward. Furthermore, while willing to engage, the Russians are intensely racist; something that does and will manifest itself in their relationship with the Chinese. The thing that Russia has going for it that China and other nations do not is its willingness to play dirty and deploy asymmetrical resources because, at the end of the day, the Russians want to be noticed – not only as a player, but as a world power, despite their economic challenges and limitations. Putin and Russia think of the U.S. 24/7, even if the U.S. does not – something that they find unacceptable.

For the Chinese, they are similarly preoccupied with the U.S., as has been evidenced in its generations –-long effort to gain access to technology and place individuals throughout the country in support of the party’s long-term goals. One area of attention as of late has been cyber, which is clearly illustrated via the Tianfu Cup. This effort started in 2017 when the CEO of the Chinese cybersecurity firm Qihoo 360 released a statement opposing Chinese citizens from participating in overseas hacking competitions. Beijing then created its own in 2018. The zero-day exploits that were created in this and subsequent Cups have focused on compromising the basic systems used by Apple, Microsoft, Google and others. The competition focused on three areas: original vulnerability demonstrations, device cracking, and operating system cracking. While such contests exist in the West, the way and extent this has been embraced by the Chinese government is concerning, as it affords de facto nation-state support for tools that could compromise international communications as well as financial and security infrastructure.

Afghanistan: The Window is Closing

According to senior officials, there is a slight window of opportunity in attempting to cajole the Taliban to pursue a positive trajectory in interacting with the world community. At this point, among the few levers that can be played, which all sides of the Taliban are responsive to, is financial assistance. While not to the same degree as most nations, there is a desire among the more internationally-focused elements of the Taliban to attempt to enlist the support of the international community in providing their government with financial assistance. That said, the ability for donors to have real influence is questionable at best.

Regardless, since the departure of the U.S. and its Western allies, Afghan leaders and tribal elements have gone back to what they have known, i.e. poppy cultivation. It is expected that, given the lucrative nature of this effort, the country and government are in the process of reestablishing itself as a main source of currency. In fact, poppy cultivation has already started senior U.S. military officials believe that there is a two-month window before those funds will start to be realized. Once those funds have reentered society and government, it is assessed that the ability to utilize the offer of financial support may become significantly limited.

Trump: He’s Running and the Signs are Pushing Him Along

Former president Trump is quietly, and in some cases not so quietly, signaling to his advisors and supporters that he is intending to run for the presidency in 2024. While his inner circle and senior members of the Republican party are attempting to steer him toward taking a lesser, albeit influential role in leading the party toward victory in 2022 and 2024, the recent political results from the governors’ elections on Virginia and New Jersey are encouraging him to believe he not only will win, but that he was right all along regarding the results of the 2020 Presidential election.

Biden Facing an Ever-Worsening Reality in the Near Term

According to senior political operatives, the reality for President Biden is as bad, if not worse, than is being presented publicly. It is assessed that the Democrats are acting as if it is not that bad, but these machinations are intended to ensure that the party’s financial supporters do not defect or leave at this crucial time leading into the 2022 midterm elections.

That said, the recently reported strife inside the White House is as bad as it is being reported. There is a fundamental lack of trust among advisors for the President and the Vice-President, akin to the situation that existed inside the Trump White House.

These reports are being exploited by pro-Trump elements, keen to exacerbate the problems being encountered by President Biden and his Administration. In turn, it is expected that the media will continue its efforts to actively support their respective sides in line with the partisanship divide between the parties and the country.

China Continues to Undertake Steps to Cause Internal Strife in Taiwan

For the Chinese, regardless of overtures to the U.S. or its willingness to enter into agreements in support of global climate change initiatives, its focus continues to be primarily on Taiwan. One of the tactics it has been pursuing is something it learned from the Russian playbook in 2016. Specifically, China has been working actively for some time to enhance and exploit current political and societal fissures in Taiwan for its own aims via social media.

The Chinese observed that the Russians were able to do this in the U.S. Presidential election; identifying, amplifying, and exploiting issues in the U.S. that resulted in tangible influence on the direction of the election. China believes it can use social media as a lever to undermine Taiwan’s nationalism and unity of purpose in countering ongoing and future Chinese aggression.