All the information collected is reviewed and analyzed by BRC subject matter experts from the NYPD’s Detectives’ Endowment Association, Inc., the FBI, and the CIA. The Source of the data examined is the NYPD’s CompStat Unit.

Our forecast of rising crime leading to an overall positive crime trend has unfortunately come to fruition based on recent crime data. CompStat figures indicate crime has risen +26% over the last fourteen days, bringing the City’s annual crime rate to +1% when compared to 2020 data. During the two-week stretch, over 4,500 major crimes were reported including 15 murders caused by 55 acts of gunfire. Published figures tell us the gunshot victim count eclipsed the 1,500-mark last week bringing the total to 1,526 so far this year. Rapes, robberies, felony assaults, stolen vehicles and grand larcenies all jumped up in the five boroughs, while burglaries fell slightly. Outside of the major crime categories, petit larcenies, misdemeanor assaults, sex-related crimes and hate crimes rose significantly compared with the same two-week period in 2020. 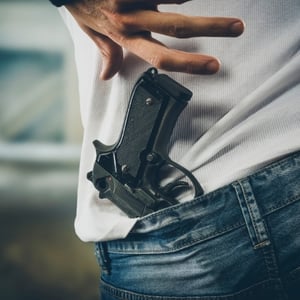 New York City businesses could benefit from developing and implementing a security plan. Many commercial businesses throughout New York City are investing in security guard services and loss prevention services.

As NYC security professionals, we use advanced security measures to deter theft and keep our clients' employees safe from criminal activity. We are one of the few New York City Security Guard companies offering cutting edge Security Intelligence Services to our clients.

This security briefing is just one broad example of the Security Intelligence-as-a-Service products that we offer.

The 1st Police Precinct covers the entire part of Manhattan below Canal Street and recorded crime hikes of +27% and +17%, respectively. Grand larcenies (+153%) were the major cause for spikes in this command.

In Chelsea, the 10th Precinct recorded up and down weeks as crime rose +23% in week one and declined –11% the following. Street robberies and felony assaults owned week one, but the 10th gained control in week two reducing robbery and burglary complaints.

Midtown Precinct South (MTS) remains a large stone in the shoe of the NYPD as crime rose once again by +213%. Significant increases in street robberies, felony assaults and burglaries really moved the needle in this command. MTS also recorded a new gun-related murder. Homicide detectives informed us the rising drug trade in the area around Madison Square Garden produced the latest homicide case.

In the Harlem neighborhood of Hamilton Heights, the 30th Precinct successfully drove crime down by -35%. Minor upticks in felony assaults and burglaries were erased by significant reductions in other categories, resulting in the bi-weekly decline.

On the Upper East Side (UES), the 19th Precinct enjoyed a rate reduction of -23% in week one, only to experience an unusual crime rate explosion in week two by +69%. Fifty-four new major crimes were reported in the second week as each crime category registered an alarming triple digit increase compared with the same period in 2020.

The 23rd Precinct recorded conflicting weeks as crime rose +50% in week one and then dropped -39% in week two. The spike in the first week was rooted in gang-related crime on housing property which was up +200% with spikes in street robberies (+300%) and felony assaults (+133%) contributing.

On the Upper West Side (UWS), the 20th Precinct struggled as crime rose +163% with one shooting incident. Fifty-eight new major crimes were reported in this command with every category registering a significant spike over last year’s figures.

The 24th Precinct on the other hand recorded a minor hike of only +4% combined for the two-week period with 50 major crimes reported and no gun violence. The minor increase was rooted in slight upticks in street robberies, grand larcenies, and felony assaults.

Near Yankee Stadium in the Bronx, the 44th Precinct recorded a +31% spike over the two-weeks combined. One murder and 5 shootings were reported, bringing year-to-date totals to 16 murders and 57 shootings in this command. Residents in the 44th are concerned with the spike in residential burglaries lately while they are at work, and shoppers are dealing with increases in street robberies and grand larcenies of cell phones.

In Queens, the 110th Precinct covering South Corona recorded a crime increase of +51% in fourteen days with 84 major crimes reported. Sex-related crimes dominated the figures in this command last week. Minor upticks were recorded in each of the major crime categories.

In Forest Hills, 112th Precinct crime swelled significantly by +113% to due increases in felony assaults, residential burglaries and stolen property.

In Astoria, the 114th Precinct reduced crime by -50% in the last fourteen days compared with figures during the same two-week span last year. Crime rate declines in this Precinct continue to be overshadowed by gun violence. Two new shootings and a murder were recorded in week one, however the gunfire was silenced in week two. Housing authority crime rose +200% last week from gang-related activity. Minor crime categories like misdemeanor assaults and petit larcenies did register significant increases compared with last year.

In the Bronx, 19 shootings erupted resulting in a homicide and 20 others being wounded. Ten rapes and 186 street robberies were reported while assaults tailed off slightly. The Bronx is by far, per capita, the most dangerous borough with 119 murders and 412 shootings year-to-date.

Brooklyn South shootings picked up over the last fourteen days, registering 4 homicides and 9 acts of gunfire. Year-to-date the borough of Brooklyn South has 147 shootings and 42 murders recorded. In the last seven days, 39 robberies and 82 felony assaults were committed while rapes fell compared with the same period last year.

Brooklyn North borough reported 7 new shooting incidents and 1 murder in the last two weeks. Robberies and felony assaults significantly increased in week one, however both categories declined the following week.

Manhattan South recorded 3 murders, bringing the year-to-date number to 19. The borough now has 31 shootings for the year while robberies and felony assaults continue to grow over last year’s figures.

Manhattan North’s gun violence continued with 2 murders and 9 shootings, bringing year-to-date stats to 51 and 182, respectively. Robberies and felony assaults are outpacing last year’s figures. Investigators inform us that gang-related activity is responsible for the uptick in violence.

Queens South has averaged 2 new shootings per week since our last report. Robberies continue to take place, however felony assaults declined noticeably over the last fourteen days. Year-to-date, the southern portion of Queens has recorded 42 murders and 146 acts of gunfire marking an increase over last year’s data.

The northern section of Queens recorded 1 homicide and 2 shootings over the two-week stretch. Queens North is faring better this year compared to 2020 figures, as shootings and homicides are down. Street robbery figures are holding steady, but the borough recorded slightly higher felony assaults the last two weeks compared with the same period last year.

With a 26% increase in fourteen days, crime trends are obviously headed in the wrong direction at a rapid pace. For the first time in a long time, NYPD crime figures are “positive,” which is not what we have been accustomed to over the last 25 years. Decline and decay of safety in New York City has residents, commuters, visitors, and businesspeople alarmed and concerned. It is unsettling to think that as New Yorkers, our safest days are behind us, but the statistics indicate this truth, as does politics.

The forecast is crime figures will continue to grow through the remainder of the year and we hold out hope that a new Mayor can turn things around in 2022 by declaring crime illegal again and safety a priority.