All the information collected is reviewed and analyzed by BRC subject matter experts from the NYPD’s Detectives’ Endowment Association, Inc., the FBI, and the CIA. The Source of the data examined is the NYPD’s CompStat Unit.

Statistics reveal that, year-to-date, overall crime in the seven major crime categories is 2% higher than last year, in part due to 1,379 acts of gunfire that caused 417 homicides. Shootings, rapes, sex-related crimes, robberies, felony assaults, grand larcenies and stolen vehicles have all increased when compared with last year. Over 126,000 New Yorkers have been victimized either by force, the threat of force or they were simply intimidated by dangerous entitled criminals.

It’s worth mentioning that the figures reflect only those who actually came forward to file a complaint and don’t account for crime victims who chose not to report to the police. City residents and businesses are being held hostage by district attorneys and other elected officials who either discourage or decline prosecution of the lawless. In the last 14 days, crime jumped by almost +21% above last year’s data as 4,569 major crimes were reported. Subway crime shot up +222% with 101 new incidents along with 57 shootings, 8 murders and 9 new hate crimes. The hidden story, untold by CompStat data, is the growing narcotics problem in neighborhoods all over the five boroughs and gang-related crimes that piggyback off the drug trade. Mayor elect Eric Adams acknowledged the crime problem he’s inheriting and seems poised to make changes. 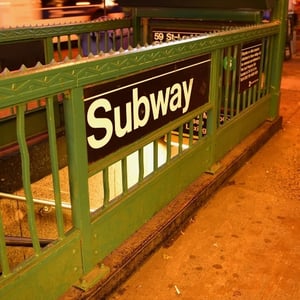 As the holidays approach, New York City businesses could benefit from developing and implementing a clear security plan. Many commercial businesses throughout New York City are investing in security guard services, and hiring companies that specialize in providing loss prevention services in NYC seems to be at an all time high.

As NYC security professionals, we use advanced security measures to deter theft and keep our clients' employees safe from criminal activity. Broosnan is one of the few New York City Security Guard companies specializing in actionable Security Intelligence Services.

This security briefing is just one broad example of the Security Intelligence-as-a-Service products that we offer.

Below Canal Street, the 1st Precinct wrestled with a two-week crime spree marking a +178% increase over last year’s figures. Hikes were recorded in every major crime category except burglaries which fell slightly. Forcible thefts and assaults grew at an alarming rate with most of the victims commuting to and from work, according to investigators at the 1st Detective Squad.

The 10th Precinct, covering Chelsea, struggled with an astounding +388% hike in two weeks. Stats indicate the huge spike was rooted in 62 major crime reports. Grand larcenies (+707%) jumped off the page and noticeable increases in felony and minor assaults contributed to the spike.

East of Hudson Yards, the Midtown Precinct South (MTS) recorded 120 major crimes in fourteen days representing +29% more activity than last year. Street robberies and other thefts continue to plague this command despite beefed up uniform patrols. As we’ve pointed out repeatedly, the drug trade is driving much of the problem at MTS.

On the Upper East Side (UES) the 19th Precinct had an unusual +32% increase in week one and reduced crime by –2% the following week. Week one’s increase was rooted in a surge in robberies (+100%), felony assaults (+500%) and grand larcenies (+26%). The following week, the 19th regained control and reduced crime in most categories with only a minor uptick in grand larcenies.

The 23rd Precinct boasted a two-week reduction of –32% however, 3 shootings erupted causing 1 homicide that detectives attribute to gang violence on housing authority property. Most crime classes fell, except robberies which increased slightly.

On the Upper West Side (UWS) robberies, felony assaults and misdemeanor assaults were mainly responsible for a +56% hike in crime.

The 24th Precinct enjoyed –31% fewer crimes over the last two weeks compared with last year. One act of gunfire was reported, and felony assaults grew slightly but they were offset by reductions in robberies, rapes and burglaries.

In Forest Hills, the 112th Precinct recorded an increase of +33%. Rapes and residential burglaries dipped however, minor upticks in felony assaults, robberies and grand larcenies were responsible for the rate increase.

The 114th Precinct in Astoria recorded conflicting weeks by reducing crime –44% in week one and reporting an +8% spike the following week, to include 1 shooting incident. During week one, only felony assault complaints grew and in week two, minor upticks were recorded in each major crime category except residential burglaries.

The Bronx remains hot as 14 shootings and 1 murder erupted in the last seven days bringing the annual total to 129 homicides and 451 acts of gunfire. The data also revealed 4 rapes, 130 robberies and 124 felony assaults.

In Brooklyn South, 4 new shootings occurred giving the borough 159 for the year which is down from last year’s total. Rapes, robberies and felony assaults declined this week and minor assaults climbed +74% versus last year.

In the northern section of Brooklyn, 7 shootings erupted bringing the year-to-date tally to 304 which is still lower than last year at this time. Rapes (7) and robberies (45) rose slightly compared with the same seven-day stretch from last year. Felony assaults fell while minor assaults jumped with 109 new cases.

Manhattan North reported 1 murder and 4 shootings this week. The year-to-date totals are 59 and 195, respectively. The borough recorded 46 robbery complaints, and 57 felony assaults were filed.

Queens South reported 1 murder and 3 shootings in seven days. Murders and shootings are up in the southern portion of Queens this year compared with last. Rapes, robberies and minor assaults increased while felony assaults dropped.

Queens North had 4 shootings last week, but the borough is down overall in murders and gunfire compared with last year. Felony assaults were up +32% with 37 new cases filed this week, but rapes and robberies declined.

Staten Island had a gun-violence-free week and murders and shootings are down year-to-date. Rapes, robberies and misdemeanor assaults grew slightly and felony assault cases decreased.

Last week Mayor-elect Eric Adams hinted at bringing back some police policies and assignments to combat the rising crime and gun violence facing New Yorkers when his term commences in January. He was immediately met with resistance with threats of violence and “blood-shed” from leaders of the New York Chapter of BLM should changes be made, which is quite telling.

Criminals have really enjoyed a good run and are prepared to use force and violence to maintain it. Mr. Adams’ words certainly spark hope and are music to the ears of law-abiding New Yorkers since they haven’t heard them in the past eight years. Our take, as the adage goes, “it will get worse before it gets better.”

Thanks for reading and have a very Happy Thanksgiving!